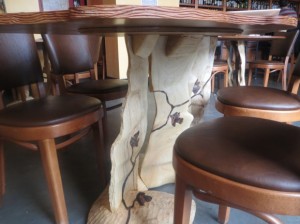 When chef/owner Francesco Mangano, decided last year to get a new sign for the restaurant, 128 East Wilson St., he enlisted a local artist, and when he decided a few months ago to change the tables, he went local instead of industrial or commercial, he said.

He chose Laux “since we are essentially into trying to involve local people — local artisans, local farmers, local everything — into the restaurant, one way or the other,” Mangano said.

All 11 tables in the restaurant are new. Laux said he made two 2-tops, seven 4-tops and two 6-tops. They can all be combined in various ways to make bigger tables.

“Being a restaurant, they can’t just be artistic and pretty and all that,” Mangano said. “They need to be sturdy and durable, too. He could make something artistic that’s very fragile and looks great but won’t last very long. He made something that was durable and pretty and nice to look at at the same time.”

The playful series of tables was designed specifically for the restaurant to create a relaxing mood and was influenced by the natural world, he said. Some have a vine motif.

“I wanted to make it feel a little bit like a garden in there,” Laux said, “referencing the beautiful food that those guys are making.”

Because Osteria Papavero means “The Poppy Café” in Italian, Laux used poppies as a theme for a couple of the smaller tables, he said.

Mangano, who opened the restaurant nearly seven years ago, calls the tables distinctive.

“The stuff that he does is different than any other carpenter/artist that I’ve seen around,” he said. “Everybody’s been happy about the tables, too.”

Close Menu
To Live With Art Is to Live Well.